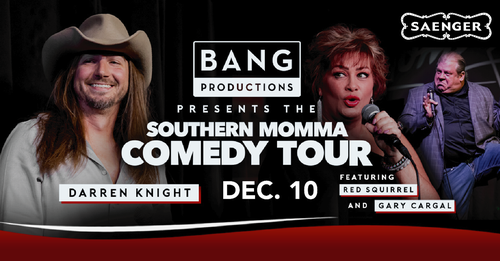 Event Description:
Bang Productions presents the Southern Momma Comedy Tour in Hattiesburg’s Historic Saenger Theater on December 10th.  The Tour features comedians Darren Knight as Southern Momma, Red Squirrel and Gary Cargal.  Tickets for the show range from $27 - $37, plus fees and can be purchased through the ticket link https://southernmommatickets.eventbrite.com or visit www.hattiesburgsaenger.com .  Doors to the theater open at 6:00 p.m. and the show begins at 7:00 p.m.

Originally from and still residing in Alabama, Darren Knight is the fastest-rising comedian in American History. Darren is one of the biggest stars in southern comedy, with a massive online following across multiple social media platforms of over 4 million worldwide and was named one of “10 Comics to Watch” by Variety Magazine.

His character, Southern Momma, became a household name due to his hilarious viral content, which led to headlining his nationwide comedy tour. Southern Momma is wildly relatable to his followers yet
hysterically entertaining for everyone.

Comedian Red Squirrel has been entertaining nationally for over 11 years with her country twang and out-of-control energetic stage presence.  She’s performed at the Golden Nugget, The Ryman, Choctaw Casino, Imperial Palace Casino, and The Majestic, to name a few.  As a former elementary school teacher in Alabama for over 27 years, her audience is now many of her former students, and the subject matter is adult-rated.

Comedian Gary Cargal is everyone’s Southern Dad or Grandpa who brings a good, stiff drink to
the comedy world.  Gary’s laudable stage performance based on his wife and two sons has
been touring nationally for six years.