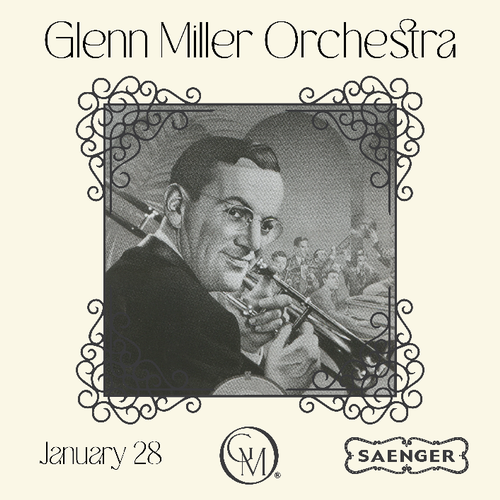 Hattiesburg, MS (December 7, 2022) FOR IMMEDIATE RELEASE - The Glenn Miller Orchestra, the most popular and sought-after big band in the world today with its unique jazz sound will perform January 28, 2023 at 8:00 p.m. at Hattiesburg’s Historic Saenger Theater.  The current Glenn Miller Orchestra was formed in 1956 in memory of Glenn Miller and has been touring worldwide ever since.  Ticket prices for the performance go on sale December 9th, range from $27.50 to $49.50 plus fees, and can be purchases through this link https://glennmillertickets.eventbrite.com
Music Director and Tenor saxophonist Erik Stabnau brings his lifelong enthusiasm for big band music to each performance of the Glenn Miller Orchestra. Erik was thrilled with the opportunity to join the orchestra in June 2017 on tenor saxophone, playing the music and solos that Tex Beneke first made famous in the 1930’s and 40’s. As a member of the band, Erik has performed across the US in 48 states and abroad in Canada and Japan and is honored to step in front of the orchestra as music director.
Having grown up with a love for the music of the swing era, Erik naturally gravitated toward Glenn Miller, drawn to his recognizable melodies and the distinctive sound of his reed section.
A Western New York native, Erik learned to play the saxophone, flute, and clarinet in a variety of disciplines before developing an interest in the large ensembles of Ellington, Basie, Dorsey, Miller and others. Excited to pursue a future in music, he attended college at the Eastman School of Music in his hometown of Rochester, earning a bachelor's of music in Jazz and Contemporary Media. Intent on broadening his education, Erik went on to study music business and recording with a masters degree in Audio Arts from Syracuse University.
Prior to his time with the Glenn Miller Orchestra, Erik performed and recorded as a bandleader and sideman throughout the Northeast, adding to his credentials experience as an educator, clinician, writer, and arranger.
Location:
Hattiesburg's Historic Saenger Theater
Date/Time Information:
Saturday, January 28, 2023
8:00 p.m.
Fees/Admission:
Ticket prices for the performance go on sale December 9th, range from $27.50 to $49.50 plus fees
Set a Reminder:
Business Directory Events Calendar Hot Deals Job Postings Information & Brochures Weather